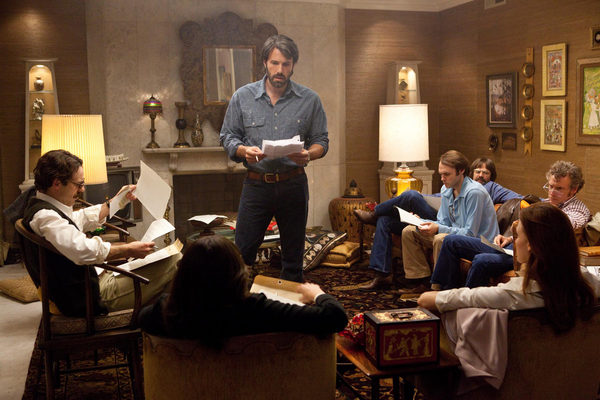 After Toronto Film Festival’s lineup announcement last week, just about everyone is excited about the opener, Looper, starring Joseph Gordon-Levitt and Bruce Willis. At a period when time travel is possible (and of course abused) Gordon-Levitt is a hitman hired to kill his future self played by Willis. (Gordon-Levitt’s face is all jacked up to convince us he really is Bruce Willis.)

While I’m excited to see Bruce Willis do what he does (guns, guns in the future, being awesome), here are five more pictures to get crazy thrilled about.

5. Argo
Bryan Cranston, John Goodman, Ben Affleck, and Clea Duvall.
A Ben Affleck  (Gone, Baby, Gone and The Town) directed picture about the intricate plan laid to remove six Americans from unstable Tehran. Argo has an amazing cast with not only Goodman and Cranston but the underrated Clea Duvall as well, who has been working the TV circuit like nobody’s business. It will be a big deal to see a movie directed by Affleck that isn’t set in his hometown of Boston. 4. The Company You Keep
Robert Redford, Shia LaBeouf, Susan Sarandon, Stanley Tucci, Nick Nolte, and Chris Cooper.
Even without a trailer released, Robert Redford’s tale of a found Weather Underground activist thrills with an insane cast (please, please, can Cooper and Nolte have a scene together?) and a story line of secrets and murder.

2. The Place Beyond the Pines
Ryan Gosling, Bradley Cooper, Eva Mendes, and Ray Liotta.
Derek Cianfrance’s next big thing after Blue Valentine stars Ryan Gosling as a motorcycle stuntman gone bad (wait, have I heard that before?) and Bradley Cooper as his rookie cop rival. Pines has been eagerly anticipated for months and pinpointed a turn towards the dramatic in Cooper’s role selection (his Silver Linings Playbook opposite Jennifer Lawrence will also be at the festival). For Gosling fan-girls it pinpoints the beginning of his relationship with co-star Eva Mendes.

1. No
Gael Garcia Bernal
Between Argo, The Company You Keep and now No, there certainly is a trend towards political flicks and the late seventies and eighties. No, by example, takes place in 1988 in Chile during the dictatorship of Augusto Pinochet. Pinochet is forced by international pressures to hold a plebiscite– asking his people to vote YES or NO to the extension of his reign. Gael Garcia Bernal, an absolute personal favorite of mine, plays the ad exec. chosen to lead the NO campaign. Like I said, it seems like the time is ripe for political thrillers and Bernal rarely disappoints.

Now tell me.
What did I miss? What TIFF flicks excite you?

Amanda Kusek writes for Pop Focal, ReAlto (gorealto.com), and her own site amandakusek.com. She pays the bills with a job as an assistant and lives in New York City. Alicia Keys and Jay-Z told her once that if she could make it here she could make it anywhere...she's working on this.
Related ItemsAnna KareninaArgoBen AffleckGael Garcia BernalJohn GoodmanKeira KnightleyNoRobert RedfordShia LaBeoufThe Company You KeepThe Place Beyond the PinesTIFF 2012Toronto Film Festival
← Previous Story Lady Gaga Makes Film Debut
Next Story → Littering and… Littering and… A Sequel?