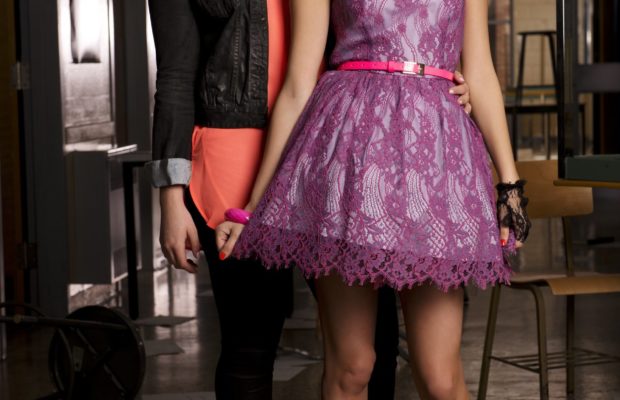 I had the amazing opportunity to speak with Annie Clark and Cristine Prosperi from Degrassi while they are in town for NYC’s GLAAD Media Awards. The annual program awards various entertainment outlets for outstanding LGBT story lines.
Degrassi, currently in it’s twelfth season (and killing it) is a Canadian show for teens widely known for musician Drake–it’s largest export. So, how did a Canadian drama wind up nominated alongside such heavy hitters as True Blood and Grey’s Anatomy?
“It’s been […] a trailblazer in a way for a lot of other shows,” says Clark who plays Degrassi‘s snotty-rich girl-gone-lesbian. “Degrassi opens up a lot of talking points with your family or even in school.” Both Clark and Prosperi remember their own schools using the show to depict drug use or other issues students deal with.
“We get tweets and letters saying you helped me come out to my family and my friends. It’s really awesome for us,” adds Prosperi, who plays Fiona’s quirky girlfriend, Imogen.
While Clark’s Fiona comes out as a lesbian before she meets her girlfriend, Imogen is a different story. Twitter and Degrassi’s own Wiki (yes it exists!) are abuzz with Imogen’s sexual orientation. Is she bi? Lesbian? I ask Prosperi if it even matters.
“I feel like in the beginning Imogen was just trying to find someone to connect with…Once she found Fiona I feel like it didn’t matter whether it was a girl or a guy, she just really likes being around Fiona. [She] doesn’t really care what people think about her and she wants to explore a lot of things in life. I don’t really think it matters. I don’t think you can label her as lesbian or bisexual. She’s just Imogen.”
It’s these types of stories and characters that draw the attention of an organization like GLAAD, a group that aims to share positive LGBT stories across the United States. And while Degrassi is a Canadian program, teens in the US can catch it on Teen Nick. And it clearly dominates over US programs with their glossy stars and endless wardrobes– Degrassi keeps their characters very real and believable.
“It’s a real show. It’s not a teen drama in that way that it’s fluffy,” says Clark. She continues as she thinks about US shows that she has loved. “[Degrassi] casts the kids at their appropriate ages. I was a huge fan of The OC. [But I thought] That’s what I am going to look like in grade 10.”
“[You think] Ryan is going to be your boyfriend,” adds Prosperi, “You think you are going to go to high school with all those people who look like they are 30.”
So what’s in store for the realest-of-the-real? The girls express openly how much they love “Fimogen’s” relationship and never want it to change but, Clark adds, “All good things must come to an end” and graduation looms at the end of this season. The girls are confident that fans won’t be disappointed.
Degrassi airs Fridays on Teen Nick at 9pm ET/PT.

Amanda Kusek writes for Pop Focal, ReAlto (gorealto.com), and her own site amandakusek.com. She pays the bills with a job as an assistant and lives in New York City. Alicia Keys and Jay-Z told her once that if she could make it here she could make it anywhere...she's working on this.
Related Itemsannie clarkawardscristine prosperidegrassiGLAAD awards
← Previous Story Exclusive: Amazing Spider-Man 2 Set Pics
Next Story → That Time Bronson Pinchot Did the Weather