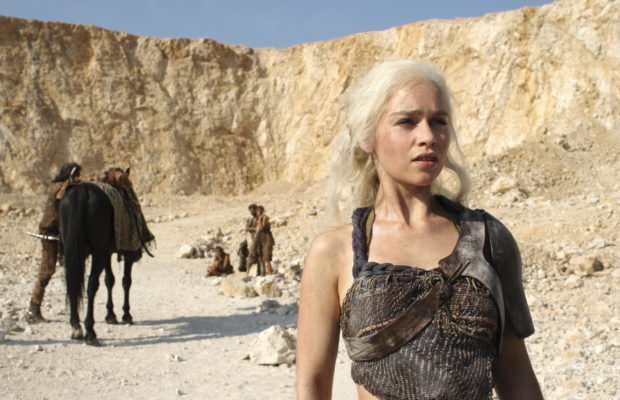 On Friday, HBO gave Game of Thrones fans a special treat at Comic Con — insight into season three of the book-based hit series. The first episode premiered on April 17, 2011, and two days later executives smelled a hit and signed Game of Thrones on for a second season.

If you live under a rock, or do not have HBO, Game of Thrones is set in the Seven Kingdoms of Westeros, and chronicles the manipulative, violent, entangled relationships of the kingdom’s noble families as they fight for the Iron Throne. Everyone and their mother think that they have the right to the throne, due to their cherished bloodline but that doesn’t mean the next family line won’t do anything they have to do to steal it away.

From me to you, buy the book AND watch the HBO series as soon as possible, don’t be that one lonely hipster who doesn’t love the Starks or loathe the Lancasters.

If you know the series and love the series, as you should, then here are the secrets you missed. Actress Diana Rigg will bless the set as Lady Olenna Tyrell, “The Queen of Thorns”. She is the grandmother of widowed and freshly married to Queen of the Seven Kingdoms Margaery and Loras Tyrell. Lady Olenna is rumored to be the true leader of the powerful Tyrell family.

Mackenzie Crook will be Orell, a wildling raider who has the ability to enter the mind of an animal and control it’s actions. (The presence of magic in the show grows as the seasons troll on).

Clive Russell is Bryndon “The Blackfish” Tully, a famous knight and uncle of Catelyn Stark. The Blackfish is also an estranged brother of Lord Hoster Tully.

Missandei (Nathalie Emannuel) was sold into slavery as a child, with her brother, from the “peaceful” island of Naath. Over the years she received education in various languages and later became a translator to the slave trader Kraznys in Astapor.

Kerry Ingram portrays Shireen Baratheon, the only child of Stannis Baratheon who escapes her lonely life through the myths and stories she covets more than life itself.

Actor Paul Kaye will be Thoros of Myr, a character that is a key member of the outlaw band, Brotherhood Without Banners. Thoros of Myr is a Red Priest, in service of the Lord of Light (as if this Lord hasn’t caused enough death and destruction) and originally stalks from the Free City of Myr, in Essos.

Ellie Kendrick is Meera Reed, the eldest daughter of Howland Reed, and is another devout follower of the Starks. Meera and her younger brother Jojen, seek out Bran Stark to help him and protect him during his journey to the North.

Richard Dormer becomes Beric Dondarrion. Dondarrion was once the lord of Blackhaven as much as he was a once celebrated warrior. Since his youth Lord Beric has become the leader of the Brotherhood Without Banners.

Tormund Giantsbane (Kristofer Hivju) is a famed wildling warrior, and also a chief lieutenant of the “King Beyond the Wall”, Mance Rayder. Tormund is definitely a threatening force to be reckoned with.

Philip McGinley as Anguy is a Catniss (of Hunger Games) and BlackHawk (of The Avengers) lovechild when talking about his archery skills. He is also another key member the Brotherhood Without Banners, proving to make them a gang holding scary, brute force.

Stannis Baratheon’s wife Selyse Baratheon (Tara Fitzgerald) makes her first debut on screen; a season after her husband impregnated an evil woman and follower of the Lord of the Light. Sadly, Selyse spends most of her life in seclusion, shut away in a gloomy tower (as if you needed another reason to hate Stannis).

Tobias Menzies is Edmure Tully, the younger brother of Catelyn Stark who has recently become Lord of Riverrun after his father’s death. (Another ally for the Starks?)

Finally, Anton Lesser will be portraying Qyburn, a former master of the Citadel, who was stripped of his chain many years ago. (He must want revenge on someone in the game).

So in season three we can expect insight into the wildlings, a new gang to be reckoned with called the “Brotherhood Without Banners”. We will finally meet the wife of troubled and eager Stannis Baratheon, as we watch his late brother’s ex-Queen wed an idiotic false air to the throne. We know that more Stark supporters will come out of the woodwork, so we can also hope to see the Stark’s get their revenge on the young king. Since regular life gets boring, even more talk of the Lord of the Light will whisper to us with this upcoming season because black magic makes everything better.

March 13, 2013 can’t come soon enough. If you aren’t already in love with the series yet, watch it and beware Game of Thrones is a cruel mistress that will leave you wanting more. The Emmy and Golden Globe award winning show based off of a New York Times Bestselling series has already started production. Wars will be fought, lines will be crossed, people will be betrayed and the innocent will die all in order to posses the Iron Throne.