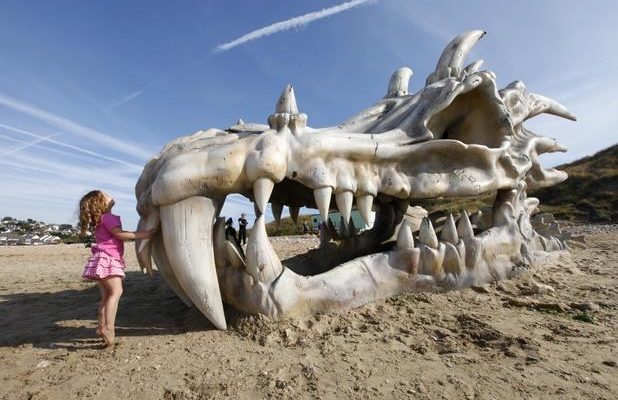 This gigantic dragon skull was found in the sands of Charmouth Beach (U.K.) on Dorset’s Jurassic Coast yesterday morning. The 40-foot skull is (obviously) a man-made sculpture designed by a team of three, taking over two months to construct. It was created by movies and TV streaming service Blinkbox, to celebrate the arrival of HBO’s third season of Game of Thrones on its service on July 15th. “Game of Thrones is easily the most talked-about TV show of the moment,” said Ben Ayers of Blinkbox. “We wanted to mark its arrival on Blinkbox with a spectacle every bit as dramatic as this amazing series.” I would say they succeeded! Game of Thrones season 3 will be available July 15 at 9am exclusively on Blinkbox, ahead of its DVD and Blu-ray release. Jon is Pop Focal's resident nerd. An expert in movie and video game knowledge and a collector of things that clutter up the offices. A former radio and TV personality who brings a very different attitude to the Pop Focal network.
Related ItemsDragonGame of ThronesTV
← Previous Story Deadpool Bust His Way Into Ultimate Spiderman
Next Story → Homer Meet Peter And Bender