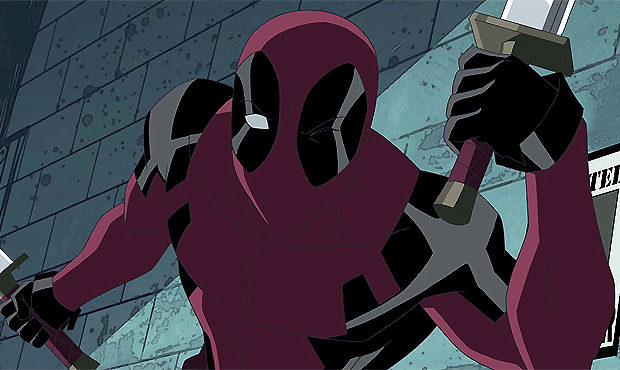 The wacky, zany tone of Disney XD”s Ultimate Spider-Man may not be for everybody, but if there”s any character it should work for, it”s Marvel”s Merc With a Mouth, aka Deadpool, and if there”s anybody who can make it work, it”s renowned Deadpool comic writer Joe Kelly.

Kelly is now a writer and an executive producer with Man of Action Studios, the makers of Ultimate Spider-Man, but back in the late 1990s, he started the first ever ongoing Deadpool series, which is credited with bringing him out of the dustbin of Liefeldian X-history and dynamically deepened his character (although co-creator Fabian Nicieza and Sins of the Past writer Mark Waid certainly had a hand in that, too). Of course, Kelly”s series had a much darker, more adult tone to it, which Ultimate Spider-Man definitely does not.

“It was so much fun,” Kelly emphasized at Marvel.com. “I mean, Deadpool is like a cornerstone in my career. [I haven’t had] much opportunity to work on the character in a while, so it was cool [we got] to bring him up into ‘Marvel”s Ultimate Spider-Man.’ It was a little bit like old Deadpool, except with the PG wheels on instead of the usual mania.”

“[This episode] is sort of an introduction to Deadpool,” he continued. “We didn’t want to go deep into any of the comic book stuff, [some of which] is too inappropriate…It’s [basically a matter] of how you introduce casino online these characters to a kid who’s never seen them before. I think we have a pretty clever way [of integrating] Deadpool into [the series], where you certainly don’t need to know any kind of backstory or anything else. In a lot of ways, we went back to the origin of Deadpool even before I came on to write him. [It’s] like, ‘what if you had a Spider-Man with no morals?’ When we came across that [concept] in the room, it got everybody excited because this idea that [Spidey and Deadpool] could fight physically and on the comedy plane, for lack of a better term, seemed like it would be really, really fun, and something that we had never seen before.”

“From soup to nuts, it’s a pretty fun episode, and it’s like visiting an old friend but in a different way. That was really exciting for me.”

Check out this clip from this Sunday”s episode of Ultimate Spider-Man, as well as the official blurb:  “Spider-Man must lead his team of teen heroes against the greatest assembly of super villains the world has ever seen!  Season Two of the hit series ULTIMATE SPIDER-MAN continues as Spider-Man comes face to face with the Marvel Universe’s most unhinged hero – Deadpool! Spider-Man envies Deadpool’s free-spirited life, but that all may change after one day in Deadpool’s madcap world!”

Some of you may notice Deadpool”s more high pitched voice in this portrayal of the character. That is because Nolan North who has voiced Deadpool a few time and most recently in the Deadpool video game isn”t involved, instead Pool is being voiced by Will Friedel of Boy Meets World fame.

Jon is Pop Focal's resident nerd. An expert in movie and video game knowledge and a collector of things that clutter up the offices. A former radio and TV personality who brings a very different attitude to the Pop Focal network.
Related ItemsCartoonDeadpooldisneyDisneyXDspidermanTV
← Previous Story Neil Marshall Will Direct Game Of Thrones Season 4 Finale
Next Story → Game Of Thrones Boneheaded Viral Marketing