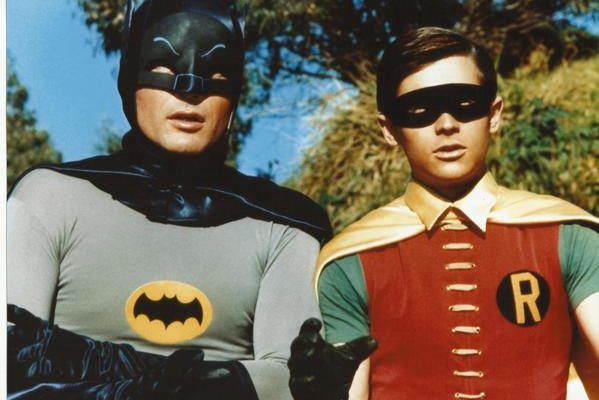 Here’s something that even Bruce Wayne would balk at the price of.

The first of six Batmobiles produced for the 1960s ABC Batman TV series has sold at auction for $4.6 million. The crowd at the Barrett-Jackson house in Scottsdale, Ariz., whooped and cheered, and the auctioneer hummed the theme to the classic show as the price rose and the excitement grew.

The car, designed by legendary Hollywood car customizer George Barris, sold for the upper end of its early estimates.

Barris constructed the Batmobile in just 15 days in 1966. It was built for $15,000 using a 1955 Ford Futura concept model (purchased for $1). It’s been in Barris’ personal collection ever since and contains Batman gadgets such as a Batphone and an oil squirter fashioned from lawn sprinklers. As a bonus, it’s road legal, should its new owner care to take it for a spin.

The winning bidder was Rick Champagne, a businessman and car collector from the Phoenix area who has been attending Barrett-Jackson auctions for 15 years.

Champagne said he grew up watching the TV show and came to the auction determined to walk away with the car. Asked where he planned to store it, the new owner joked, “in the living room. I’m going to tear down a wall and put in my living room.”

The Batmobile ties the record for the highest price fetched for a movie car at auction. In 2010, the Aston Martin DB5 driven by Sean Connery in Goldfinger set the record when it went for $4.6 million. In 2011, the Chitty Chitty Bang Bang car auctioned for $805,000, shy of the $1 million it was expected to fetch.

Jon is Pop Focal's resident nerd. An expert in movie and video game knowledge and a collector of things that clutter up the offices. A former radio and TV personality who brings a very different attitude to the Pop Focal network.
Related ItemsAdam WestbatmanBatmobileCarClassicGeroge BarrisTV
← Previous Story Chef Brian Malarkey On ABC’s New Food Competition “The Taste”
Next Story → ABC Cancels “Don’t Trust The B In Apartment 23”