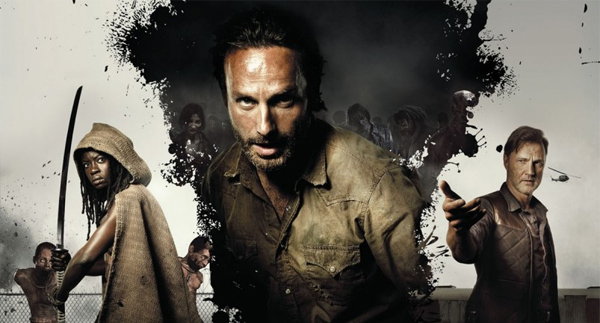 One of the most exciting things to come out of this year’s San Diego Comic-Con so far is undoubtedly the season three trailer for The Walking Dead. That was first revealed during the panel yesterday afternoon which was moderated by Talking Dead host Chris Hardwick and included Glen Mazzara, Robert Kirkman, Gale Anne Hurd, Dave Alpert and Greg Nicotero, as well as cast members Andrew Lincoln, Sarah Wayne Callies, Norman Reedus, Laurie Holden, Steven Yeun, Lauren Cohan, Danai Gurira and David Morrissey. Here are some highlights from the panel.

• Robert Kirkman: “We open on a scene of I can’t tell you, and it quickly transitions into a scene of you’ll have to wait and see. We have a prison, that we’ve built. It’s pretty amazing. It doesn’t look like a backlot.”

• The season will be much faster paced, with those on the panel comparing it to the far more action-packed latter half of season two, with the momentum remaining consistent throughout.

• Greg Nicotero: Every year we want to show and refine and determine what we love about certain zombies. We’re always changing the contact lenses and the dentures, we put bald caps on the guys. We really wanna sell this year that they’re decomposing, emaciated and hungry. And there’s a lot of them. We’re going to do some animatronic puppets this season that we didn’t get to do before. We’re going to keep you guessing.”

• Norman Reedus: “He’s a guy that’s under the thumb of his big brother Merle. Being away from Merle, he’s finding himself needed and appreciated, and making bonds with these people. He’d fight to the death for this people. He’s kind of growing up. I love playing him.”

• Laurie Holden: “At the end of season two, I was saved by this wonderful woman, Michonne. It’s a very different season for Andrea. She’s met this alpha female and they become very good friends and they watch each others backs. It’s wonderful storytelling as the battle the elements in this apocalyptic world.”

• Danai Gurira and David Morrissey talked about being welcomed to the show by their fellow cast members, with the latter stating: “I came into the show as a fan, I’ve known Andy for a long time, I just loved it. When the opportunity came I was very excited. The thing they can never prepare you for is walking onto set and discovering they have a great crew. People want to be there. They want to work on this show.”

• During the fan questions, several young girls professed their love for Steven Yeun, leading moderator Chris Hardwick to joke, “We know your demographic now Steven, and we know you should not now be allowed at Legoland.”

• Robert Kirkman was asked about the chances of introducing Daryl into the comic book series, but he adamantly stated that it will NOT happen as he has the series planed out well into the future.

• Sarah Wayne Callies: “I think Lori did everything she could to handle Shane. She brought it to Rick – she didn’t tell him to kill him, she told him to watch his back, which wound up right, because Shane tried to kill him and the right man won that fight.”

The dead return on October 14th.