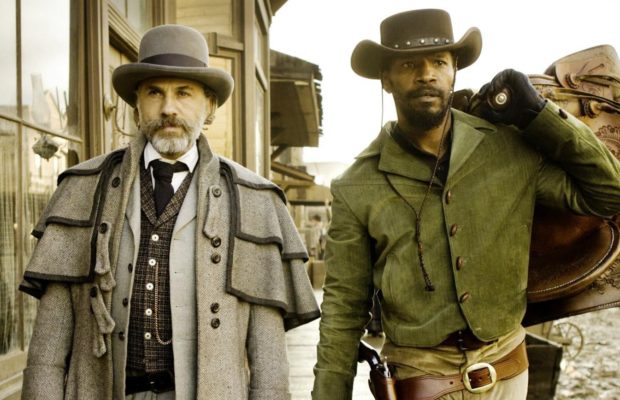 Django Unchained is one of the most eagerly anticipated movies of 2012 and that more than likely explains why Hall H was packed out during the panel at today’s San Diego Comic-Con. Director Quentin Tarantino was in attendance, alongside stars Jamie Foxx, Christoph Waltz, Walton Goggins, Don Johnson and Kerry Washington (unfortunately, neither Leonardo DiCaprio or Samuel L. Jackson were able to make it). The majority of the panel featured the director and cast talking about the film, and the following quotes which are featured below come courtesy of Sports Mole.

• Quentin Tarantino was asked how long he has been working on the idea of Django Unchained and said, “About 13 years, kind of altogether. I always wanted to do a western. Since spaghetti westerns have always been my favorite, I always thought it would be in the universe of spaghetti – the violence, cool music… The germ of the whole idea was a slave who becomes a bounty hunter. From that point on, it became a love story, but that initial idea was a slave who becomes a bounty hunter and hunts white men. Before the civil war. You can’t be more surrealistic than it was in real life. It was fucked up. It was bad and frankly it’s surrealistic – it’s unimaginable to think of the pain and the suffering that went on in this country. Hence making it perfect for a spaghetti western adaptation.”

• The panel were asked about the controversy which may surround the film, to which Jamie Foxx replied, “It is but we’ve grown up too. With Tarantino you expect a different ball game. The script alone was blazing through Hollywood before it even got going. You expect that from him, and actually when we started shooting it, it didn’t fall away but you watched Quentin putting together this fantastic film with fantastic people.”

• Jamie Foxx on what it was like to get into the mindset of a character like Django: “Getting there was really a journey because at the start of this process, QT pulled me aside and said ‘I’m worried you can’t get to that slave’. He said ‘throw your ego out of the door right now so we can get to the work’.” Tarantino: “I remember we had a talk on our first day of rehearsals. When you’re introduced to Django you see him on a chain gang being lead from Mississippi to Texas. When we start, he’s sixth from the seventh on the left in the chain gang. He needs to get to that point from nothing.”

• Christoph Waltz talks about the relationship between between Dr. King Schultz and Django, explaining that he NEEDS him and it’s not as simple as just rescuing a slave from captivity. “Dr Schultz and Django are a team and yes, the dynamic changes over the course, but whether that’s a father figure or a teacher, I dunno.” Tarantino agrees, adding: “In the first half of the story, Schultz is the mentor, teaching Jamie how to read and so on, but when the actually get to the thick of it in Mississippi, it’s Schultz who’s caught short. But Django’s not, he knows this world.”

• “I didn’t do a movie about a slave,” says Tarantino. “The character starts off as a slave. I was interested in a slave narrative. To me one of the fun things about telling the story was to take the western genre we know so well and place it in the antebellum south and place a black character in it. So take the western cliches and place them in the south.”

• Eight minutes of footage from the film was then shown. It was mostly an extended version of what we’ve already seen in the trailer, but the sizzle reel has been praised for showing a perfect balance of action, violence and humor.

• Walter Goggins reveals some new details about Billy Crash (one of Calvin Candie’s henchmen) saying that he’s, “a ruthless dude. But he’s from a working man’s perspective. He’s not the man but he works for the man. He’s a tough cookie.”

• Samuel L. Jackson’s Stephen is actually Candie’s house slave according to Tarantino who adds, “Leo’s character inherited this candyland. There’s Stephen the manservant and Billy Crash, who are the two CEOs. Stephen runs everything to do with the house and the farm. So actually they don’t have that many scenes together, the Billy and Stephen relationship is a good one because together they run the house and farm together.” Despite what you might be thinking, Stephen is NOT a sympathetic character. He raised Candie and the two have a close relationship.

• Kerry Washington on Broomhilda von Schaft: “She got her name the way most people of African-American descent did, and that’s by the people who owned her. She got her name from a German family.”

• An interesting titbit from Tarantino as he reveals that he realized Django’s journey is similar to that of Siegfried rescuing Brynhildr in the classic German tale. He also told those in attendance that there is only one week of shooting left. Sasha Baron Cohen is NOT in the film and Jonah Hill wasn’t brought in as a replacement. His role was simply written out.

• Tarantino is then asked about Jonah Hill’s last-minute role in the film, revealing that, “He’s in a sequence with Don. They’re not the KKK because that came about after the civil war to keep black folks in line, but the predecessors to the KKK was a group called The Regulators, who were there to keep slaves in line and terrorize them basically. It’s a regulator raid being led against Djaango and Schultz. It starts off like it’s going to be scary and intense, but then there’s this sequence that is the funniest thing I’ve ever written.”

• It’s not entirely clear whether he was joking, but the director teases:”Broomhilda von Shaft and Django will have a baby, then that baby will have a baby and so on and so on…. and then John Shaft will be born.