Home / Viral / The Most Insane News Story You’ve Ever Heard

The Most Insane News Story You’ve Ever Heard 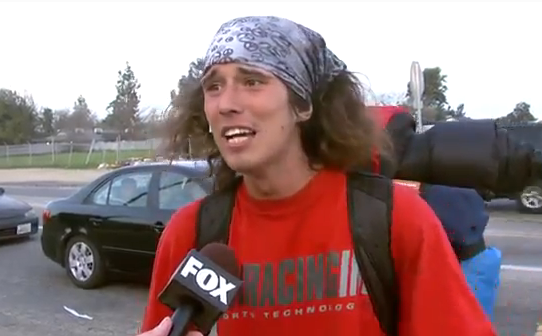 Meet Kai, he’s a hitchhiker straight out of Dogtown. Kai is now an internet sensation after a video of him telling the story of how he bludgeoned a rampaging homicidal Jesus (You’ll understand soon enough) with a hatchet. It’s not so much the act of ?heroism? that is getting him attention, as much as it is the way in which he tells the story. You would think he would be a bit more downbeat considering he just nearly beat someone to death but all he wants to do is catch some waves.

For those wondering the psycho identified as Jett McBride was taken into police custody on suspicion of attempted murder, and his bail has been set at $1 million.

It should be noted the video contains LOTS of adult language and is probably not suitable for younger viewers.

Jon is Pop Focal's resident nerd. An expert in movie and video game knowledge and a collector of things that clutter up the offices. A former radio and TV personality who brings a very different attitude to the Pop Focal network.
Related ItemscrazyDogtownfunnyHatchetHitchhikerinterviewJesusKaiMurdernewsPsychoSurferviralyoutube
← Previous Story “The Onion” Pokes Fun At Real Murders Now
Next Story → The Greatest Invention Since Sliced Bread