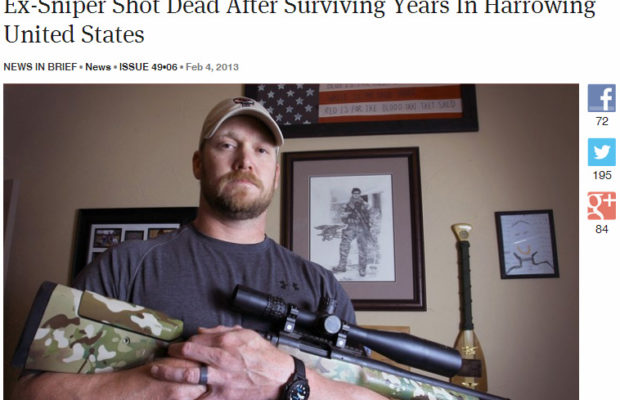 The Onion is a website that makes up fake stories for us to laugh at. They’re sometimes funny. It must have been a slow fake-news day though because now they’re just taking real news about murders and making them satirical… somehow (we’re still not sure how). From their website:

Tragedy struck on Saturday as famed former sniper Chris Kyle reportedly was shot and killed at a local gun range, marking a bitter end to the life of a renowned Navy SEAL who had survived long, brutal years in the hellish landscape of the United States.

LOL! Get it? He was murdered in the United States and not overseas in a war zone… but America is the war zone! Get it? Get it…?

Maybe The Onion isn’t to blame here. Times are tough for them because the news is already funny and sometimes it’s hard to make fake funny news when real news already makes people laugh.

The “story” has fired up a political argument from both sides (check out this comment thread) and the story really doesn’t joke about Kyle himself, just uses his death as a way to make joke that falls flat. Either way, we’re all talking about The Onion, a comedy site that hasn’t been relevant is ages. They once made a movie which included Steven Seagal (lol) that was made in 2008 and went straight-to-video (…oh).