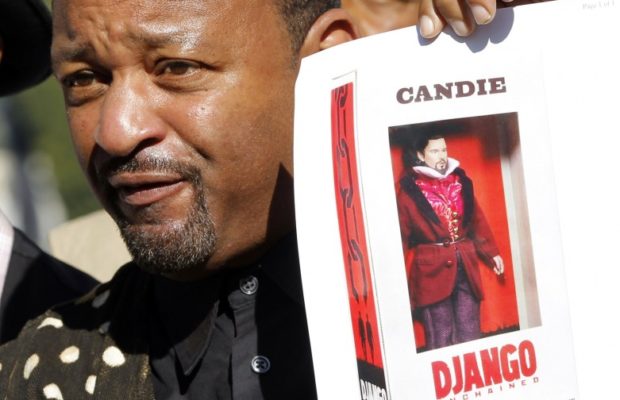 A few days back we told you about the Django Unchained action figures and how they were discontinued due to controversy. We also mentioned how prices for the items had begun to skyrocket on eBay due to the overwhelming demand of collectors who wanted these now rare figures.

Well a few days after that all went down eBay decided that it was now the bastion of political correctness, and began removing all listings for the Django figures. eBay sent the following message to users who had their listing removed.

“Unfortunately, we had to remove your listing because of the following: Since the manufacturer of this product has discontinued the item’s sale due to its potentially offensive nature, we are not allowing it to be sold on eBay.

We appreciate that you have chosen eBay to sell your items, however I must insist you don’t relist this item. We don’t allow listings that use racially offensive terms on eBay.”

There is two problems with that statement. Firstly the vagueness of the term “potentially offensive”, which pertains to pretty much anything made by man, yet eBay allows listings for items related to Nazi’s, The KKK, and other slavery paraphernalia. The other problem with the statement is “We don’t allow listings that use racially offensive terms” well considering there is nothing derogatory on the figure or box and the item descriptions are just general sale information, I can’t quite see how that applies to the Django figures. However someone should alert eBay of this item, which “potentially” breaks both of those policies.

I personally called eBay customer service after having my own listing removed to get to the bottom of why exactly eBay is being selective and inconsistent with their offensive materials policy.

Jon is Pop Focal's resident nerd. An expert in movie and video game knowledge and a collector of things that clutter up the offices. A former radio and TV personality who brings a very different attitude to the Pop Focal network.
Related ItemsBannedCustomer ServiceDjango UnchainedEbayfeaturedmoviePhone CallSamuel L JacksonviralWeinstein Company
← Previous Story That Time One Direction Crashed A Wedding
Next Story → “The Onion” Pokes Fun At Real Murders Now