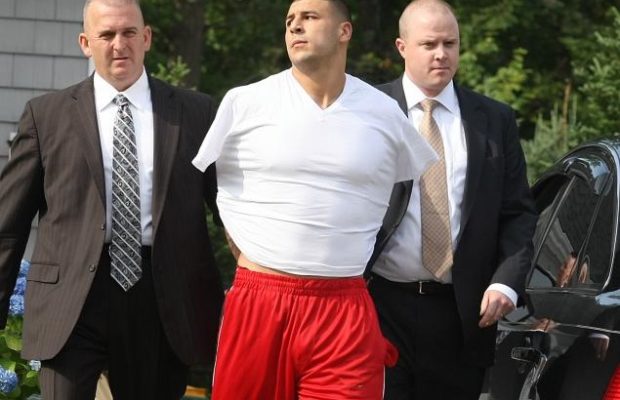 Two hours before doors to the team’s ProShop opened, Tony Ferreira, a bearded high school biology teacher from nearby Swansea, arrived first, carrying a red throwback Hernandez jersey in a black plastic bag. He sat on a cinder block and opened his book, “Spillover: Animal Infection and the Next Human Pandemic.” He sighed as he explained his anxiety.

“We came here to commiserate,” Ferreira said as fans filed in behind him.

“We’re all here to mourn,” said Millie Cruz, a mother of two who drove up with her family from Nutley, N.J. Friday morning to participate in the exchange.

One by one, more than 500 Patriots fans paraded through the ProShop to present their unwanted jerseys to team store officials in the opening hour. Ferreira was given a voucher and claimed a new replica Tom Brady jersey from the racks inside the store. One fan wore a gray T-shirt emblazoned with the words “I Hate Eli Manning” on the front and “Peyton Sucks Too” on the back. Zack Klein, a 14-year-old from Newton, Mass., donned a red Michael Vick jersey from the quarterback’s days with the Atlanta Falcons, before he was imprisoned for 548 days on a federal conviction for dog fighting conspiracy.

“I was looking in my closet at a few jerseys today, saw Chad Johnson’s, and then this Vick one and I just thought, ‘That’s perfect,'” Klein said as he waited at the register. “I thought about giving the jersey to my dog, Duke, actually.”

The Patriots continued to scrub away any remnant of Hernandez’s relation to the organization. Once arrested on June 26, Hernandez, who electrified the offense with three productive years alongside tight end Rob Gronkowski, was released from his five-year, $40 million contract within two hours as the team expressed “disappointment” in Hernandez for his alleged role in the homicide. On his last visit to Gillette Stadium, while under investigation, Hernandez was asked to leave. On Saturday, a girl imitated Hernandez’s look while being arrested, wearing his No. 81 jersey over her arms, just as Hernandez was led out in handcuffs from his $1.3 million house in North Attleborough.

Reminders that a market for Hernandez merchandise still exists loomed over the day. eBay, the global online commerce company, pays for signage inside Gillette Stadium and on a water tower in the neighboring parking lot. It has seen a variety of Hernandez products draw interest in recent days. Rookie cards, glossy photographs and jerseys ranging from pink to gray and back to Florida blue are for sale. One jersey is being auctioned for $1,500. For 99 cents, one can purchase “Murder’s Row,” a set of trading cards featuring Hernandez and retired linebacker Baltimore Ray Lewis, who pleaded guilty to obstructing justice in an unsolved murder investigation 13 years ago.

There are several pieces of Hernandez’s clothing that police find far more valuable than jerseys. In a search of the “flop house” Hernandez maintained in Franklin, Mass., 12 miles from his house and 10 miles from Gillette, law enforcement officials found a “white colored hooded sweatshirt consistent with the one worn by Hernandez as seen on the surveillance videos on the night of the homicide” as well as “Cranberry colored back and brim and light blue front pace panel – society stitched on the front.” Police believe the hat is “critical” to placing Hernandez the night before the homicide. They mentioned a number of shirts with the No. 81 stitched on them in their report.

“He should go to jail just for being dumb,” Cruz said. “Was there some sort of drug or alcohol imbalance?”

On Wednesday, the Wrentham District Court released male voice over talent documents detailing the more items seized by police during the searches. Among the discoveries were a loaded Glock .45 caliber magazine clip, keys to a black Hummer H2, a single rifle round, multiple boxes of ammunition and one last link to his old team. It was listed as, “New England Patriots check to Aaron Hernandez.” No amount was noted.

“I wouldn’t stand in line for that,” Cruz said.