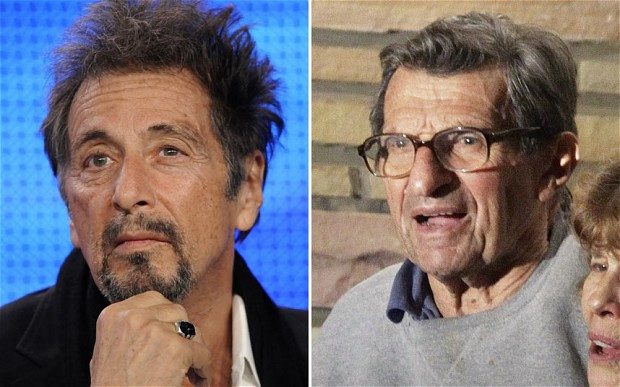 While a new college football scandal dominates the headlines, Hollywood is preparing to adapt another one.

Al Pacino will star in a film called Happy Valley in which he will play former Penn State head football coach Joe Paterno. The film will be directed by Brian de Palma, who he he famously worked with on Scarface.  Producer Edward R. Pressman has optioned Joe Posnanski’s PATERNO (which the sportswriter began writing long before the Jerry Sandusky scandal broke), and Dave McKenna (American History X) is in talks to write the script. Pressman says he “can’t think of a better duo to tell this story of a complex, intensely righteous man who was brought down by his own tragic flaw.”

Paterno was loved as the head of Penn States football program until it was revealed that he was part of the cover up about Jerry Sandusky being a child molester. Not long after he was fired from Penn State, he died of cancer (and presumably rots in hell). The real question here is who will get the titular role of Sandusky, the boy loving defensive coordinator who is currently doing 30 to 60 in prison. This is sure to be a hell of a controversial film as I’m sure Hollywood will take liberties with how much Paterno really knew about what was going on in his locker rooms.1z0-043

Jon is Pop Focal's resident nerd. An expert in movie and video game knowledge and a collector of things that clutter up the offices. A former radio and TV personality who brings a very different attitude to the Pop Focal network.
Related ItemsAl PacinofootballHappy ValleyJoe PaternomoviePenn State
← Previous Story Spring Breakers Trailer Has Arrived With A Skrillex Soundtrack
Next Story → Django Recalled