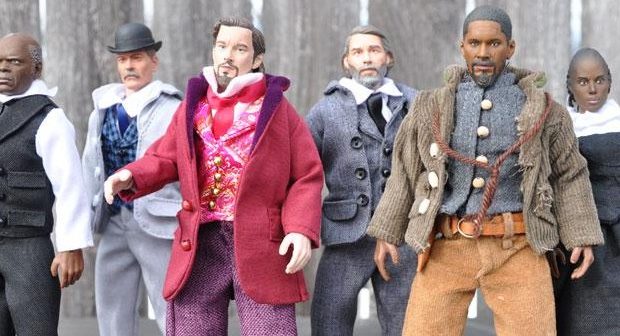 Marking victory for several African American groups, The Weinstein Co. has asked a toy maker NECA to discontinue a line of controversial “Django Unchained” action figures after receiving complaints that they were offensive. As if the film itself, which scored writer-director Quentin Tarantino and actor Christoph Waltz Golden Globes for best screenplay and best supporting actor (respectively), didn’t attract enough heat, the accompanying doll collection managed to piss off notable civil rights groups,  including Rev. Al Sharpton’s National Action Network and Project Islamic Hope. Additionally, a Change.org petition to stop the sale of the dolls began circling shortly after news of the collection broke and has since garnered nearly 19,000 signatures.

The studio said Friday that such collectibles have been created for all of director Quentin Tarantino’s films, including “Inglourious Basterds,” and that they were meant for people 17 and older, the audience for the film. “Django Unchained” is a violent mix of spaghetti Western and blaxploitation genres about a freed slave (Jamie Foxx) who becomes a bounty hunter. Civil rights groups argued that the toys trivialized the horrors of slavery.

“We have tremendous respect for the audience and it was never our intent to offend anyone,” The Weinstein Co. said in a statement. Toy maker NECA did not immediately respond to a request for comment.

Sources say that the company produced only about 1,000 figures before pulling the plug.

Following the announcment resellers flocked to sites like amazon.com and eBay where the figures have no skyrocketed in price, with certain figures (Django and Broomhilda) now going for over $400.

Jon is Pop Focal's resident nerd. An expert in movie and video game knowledge and a collector of things that clutter up the offices. A former radio and TV personality who brings a very different attitude to the Pop Focal network.
Related ItemsAction FigureBoycottDjango UnchainedDollsJamie FoxxmovieNECAProtestQuentin TarantinoToys
← Previous Story Al Pacino To Protect Child Molesters (In Joe Paterno Movie)
Next Story → The White House Is Under Attack From The Chinese?