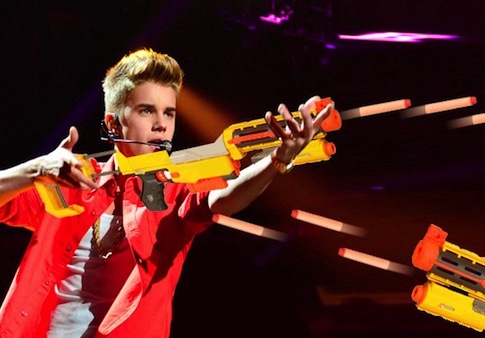 Every year, thousands of pathetic, meritless lawsuits and police reports are filed against people with an abundance of monetary resources. It is being reported that pop music star Justin Bieber is being investigated by Canadian police (Mounties?) for assaulting a female security guard with a Nerf gun. According to sources, Bieber was apparently Nerf fighting with his 3-year-old brother and 4-year-old sister and apparently one of the soft foam darts struck the woman, causing here to throw a fit about the incident.

TMZ, reports that the unidentified female security guard went to the Ottawa police after recovering from her Nerf wound that must have been horrific, and filed a police report claiming she was assaulted by the toy. For whatever reason, police officers have decided to take her claim seriously, and they’ve reportedly interviewed several witnesses to figure out exactly what happened.

No one involved with this case has spoken publicly about the specifics of what happened, but it would be a shock if the Biebs was actually charged with doing anything wrong. Even if he intentionally fired a Nerf gun into her face, which I’m sure he wouldn’t do, an overwhelming majority of “victims” would be slightly irritated and then move on with their lives.

Hopefully, this will be the last we hear of this lunacy, but if something else does come out, we’ll make sure and bring you the news. Until then, be prepared to stock up on Nerf ammo, take care to lock up all of the Nerf guns darts in your house and get ready to be background checked every time you go to a toy store.

Jon is Pop Focal's resident nerd. An expert in movie and video game knowledge and a collector of things that clutter up the offices. A former radio and TV personality who brings a very different attitude to the Pop Focal network.
Related ItemsAssaultBancanadaGunjustin bieberNerfWeird News
← Previous Story Restaurant Has Tourist Arrested For Forgetting Wallet
Next Story → Gov Ball Haul