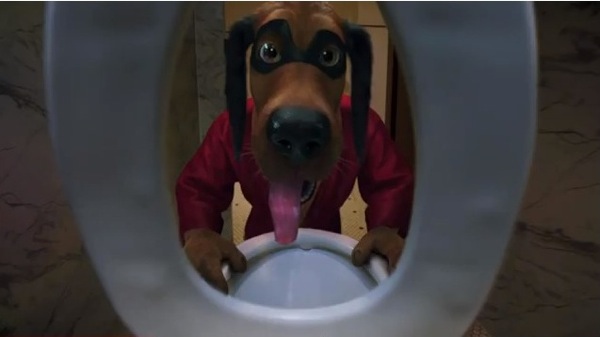 Inspired by the recent success of Alvin & The Chipmunks and The Smurfs, Warner Bros. has scoured their vast library to bring you films based on beloved characters bastardized for today generation. First up we have Hong Kong Phooey featuring the voice of Eddie Murphy channeling the voices of Donkey, Mushu, And Eddie Murphy. It doesn’t look awful from a visual perspective, but it seems WB missed the point of the old cartoon, which was a bumbling dog who just happened to be a Karate master. Instead we get a talking dog drinking out of the toilet and eating urinal cakes.

The other half of this clip takes Looney Tunes character Marvin The Martian (featuring a horrible voice actor who sounds nothing like the charming original voiced by Mel Blanc). And instead of a space adventure featuring Duck Dodgers we get this weak Marvin wants to destroy Christmas story with him for some reason being wrapped up as a present for a young boy, who Marvin proceeds to try and murder with lackluster results before incinerating the Christmas tree. And then after seeing Marvin nearly kill him the young boy decides he wants to play with the murderous alien because he thought his disintegration gun was cool, hmmm something tells me this will result in the kid bringing the gun to school with hilarious results, good thing no kids ever brought a gun to school in real life and done something irresponsible……..Oh, thats right. Anyway here’s the shitty footage.

Jon is Pop Focal's resident nerd. An expert in movie and video game knowledge and a collector of things that clutter up the offices. A former radio and TV personality who brings a very different attitude to the Pop Focal network.
Related ItemsHong Kong PhooeyLooney TunesMarvin The MartianmovieTest Footagewarner brosWB
← Previous Story Biggest Movies Of 2012 (And Why They All Sucked)
Next Story → Joseph Gordon-Levitt “In The Mix” for GUARDIANS OF THE GALAXY