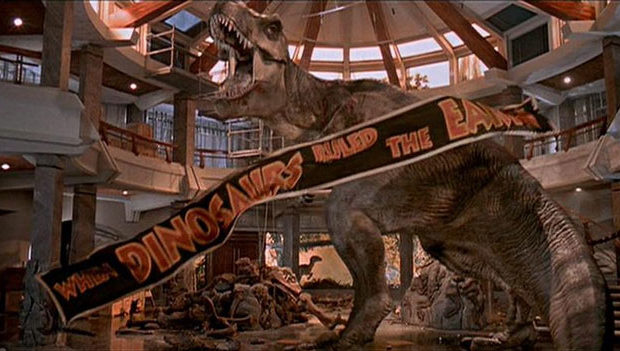 A fourth entry in the Jurassic Park franchise has been in various stages of development for quite some time now. While the prospect of the film moving forward seemed to dwindle as time went on, there have been some major developments on the Jurassic Park 4 front as of late. Steven Spielberg announced at last year’s Comic-Con that they had a story in mind and hoped to make the film “in two or three years.”

Late last month Rise of the Planet of the Apes screenwriters Rick Jaffa and Amanda Silver were brought on board to pen the script, and now we’ve got an update from Spielberg’s longtime producer Frank Marshall. Marshall when asked about the status of Jurassic Park 4 said “I would say that it will be on the screen within two years.”

Marshall went on to reveal that they’re aiming for a summer release since it’s a “popcorn movie,” and confirmed that it’s definitely a sequel and not a reboot or remake. Spielberg confirmed earlier this year that he won’t be directing Jurassic Park 4, but he’s clearly heavily involved in the development of the film. Marshall cited the advances in visual effects as one of the exciting things to look forward to in JP4: “That’s what’s gonna be great about it, technology’s taken a leap now that we can really do some great things”. That’s not to say that the filmmakers will be completely abandoning the practical effects and prosthetic work that was put to great use in the earlier films. Marshall added that using practical dinosaurs not only feels real to the audience, but aids the actors in their performances.

If they are indeed looking at getting the film in front of screens within two years (which jibes with the timetable Spielberg laid out at last year’s Comic-Con), hopefully we’ll hear word about a director choice soon. There are a number of young, exciting filmmakers working today that could offer a fresh take on the franchise, and I’m eager to see who will take the reins.

Given how many years this project has been in development I am hopeful they finally have a script that is better than the one written by William Monahan and John Sayles that leaked out back in 2004 that involved an “Expendables” team of super smart dinosaurs armed with guns and body armor sent into kill Costa Rican drug dealers. Yea, that almost happened….