Home / Movies / What Was The Original Ending Of World War Z?

What Was The Original Ending Of World War Z? 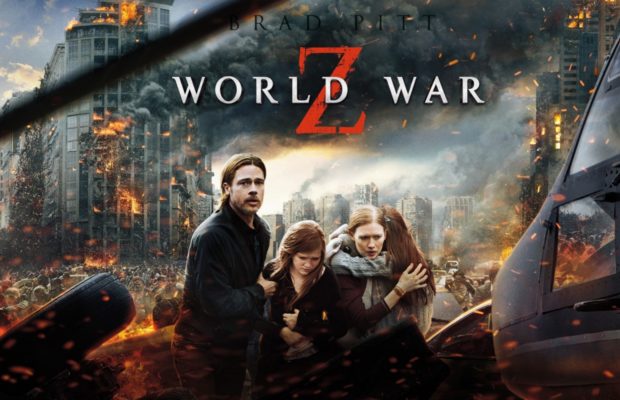 Firstly and I think this goes without saying but this article will contain spoilers about the film.

The production of World War Z has gotten a bit of a bad reputation on it’s long road through development hell and it’s now infamous reshoots, which now make a whole lot more sense once you read what originally happened. For those who haven’t seen the film, the ending involves Gerry discovering a way to defeat the Zeke’s and a sort of happy reunion with Gerry’s family, I guess the studio felt it wrapped things up much nicer with a more up beat ending than what was originally shot. One has to wonder if we’ll get to see any of this on the DVD release.

“The plane Gerry and Segen board is bound for Moscow. Upon safely landing, everyone on board is rounded up by the military.Cocktail Dresses Online
The elderly and the sick are executed and the healthy people, including a very shaken Gerry, are immediately drafted into armed service, though not before one particularly nasty Russian soldier takes Gerry’s cell phone. The story then jumps forward an unknown amount of time and we catch up with Gerry, who now has a full beard and has been a part of Russia’s zombie-clearing squad at least long enough for it to have changed to winter. He looks almost dead inside, but the reality is that over this time he’s become an experienced and ruthless zombie killer, and he’s the leader of his own equally capable unit.

Gerry’s unit is tasked with clearing subway tunnels of zombie hordes. This is the first time we see the Lobo, a perfected zombie-killing tool that’s sort of a shovel/battle axe that would have been one of the few things from the book to make it into the movie. Gerry and his team use them to slice their way through every poor zombie that tracks them through the tunnels by following their sounds. It’s all routine work for them, and when they’re not in the tunnels killing, they’re basically just preparing to go back in. During this downtime we see a bit of bonding between Gerry and another English-speaking friend, Simon. The two play a guessing game of what celebrities would have survived the outbreak.

We get a couple intense scenes of tunnel combat (at one point Gerry has to kill one of his own after being bitten), and eventually they emerge above ground and are right in the middle of The Battle of Red Square (pictured in the banner above, though this is likely not from the movie and was created just for marketing purposes). This is a much, much larger set piece that involves several different front lines constantly fighting the hordes. There’s a kind of weird plot point of Gerry’s team now getting re-assigned to different front lines based on what their religion is (Gerry and Simon are atheists), the logic being that people would fight harder alongside people of the same faith. But they’re segregated and Gerry tries to convince the General in charge that his elite, tunnel-sweeping crew should be allowed to teach those other people how to fight with Lobos and makeshift shields and what not.

There’s arguing with this Russian General, but eventually Gerry convinces him to let him teach some of the other front lines how to fight, but this involves having to go back into the tunnels with Simon so they can sneak past the zombies on the other side. It’s there that Gerry notices the zombies are having a hard time dealing with the severe Russian winter by remembering just how fast they were in Jerusalem, and so it occurs to him that the way to defeat the zombies is to let their bodies freeze.

Gerry and Simon are now on a mission to inform the Russian command to extinguish all fires and move their battle lines so as to keep as many of the zombies in the cold as possible, but then they run into a generator room where the nasty Russian soldier who took his phone upon arrival in the country is boozing it up with some very reluctant girls. One of those girls is Segen. Gerry grabs a belt of grenades and tosses one into the room. He, Segen and Simon duck behind a couch to survive the blast before making a break for it.

Once again Gerry meets up with the General and convinces him to use Russia’s cold to their advantage, as they have done in past homeland wars. This works and he orders everyone to extinguish all of their fires. Eventually this gives them the upper hand in the battle. Gerry takes this turn toward the offensive to retreat. He takes a couple of shots of vodka, then picks up the phone he retrieved from the soldier and calls his wife, Karin.

Even beyond the entire Russian battle sequence, it’s this call to his wife that’s the real game changer for the (aborted) tone of World War Z.

Gerry reaches Karin. He explains to her that the cold is the way they’ll win battles, which does her no good because it just so happens she and the kids are in a refugee camp in the sweltering heat of the Everglades. They’re in the type of camp where you have to have something to trade to survive, and it just so happens the one thing Karin had to trade was herself. She doesn’t explicitly tell Gerry this, but after she hastily hangs up the phone we see that she’s in some kind of reluctantly consensual relationship with the soldier who rescued them from the rooftop at the beginning of the movie.

Did you happen to notice that soldier on the helicopter was played by Matthew Fox? Did you wonder why they bothered to cast someone as recognizable as him in a role that was pretty inconsequential and had almost no lines? That’s because his real payoff wasn’t until the end.

Fox’ parajumper soldier then calls Gerry back and explains to him that he should just stay wherever he is and start a new life like he and Karin have. Gerry refuses to accept this, though, and he embarks on a rage mission to get back to his wife and daughters. Trouble is the nearest port that won’t be frozen is thousands of miles away, so there’s a montage of Gerry, Simon and Segen crossing various terrain until they ultimately end up on a boat. They’re now off of the Oregon Coast and they attack the American shore like it’s D-Day. And that’s how the movie ends. Not with Gerry having discovered a cure, but with him storming across the United States of America to get Karin back.Celebrity Dresses Sale
”

Jon is Pop Focal's resident nerd. An expert in movie and video game knowledge and a collector of things that clutter up the offices. A former radio and TV personality who brings a very different attitude to the Pop Focal network.
Related ItemsAlternate EndingBrad PittDevelopment HellfeaturedmoviesParamountworld war z
← Previous Story He’s Still Iron Man (At Least For 2 More Sequels)
Next Story → Deadpool Ain’t Dead or Is It?