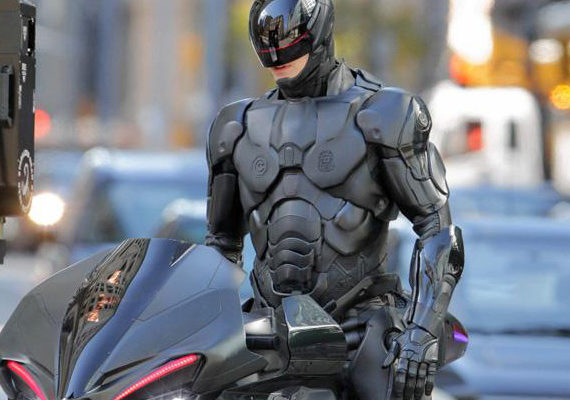 Panel opened with a news show narrated by Samuel L. Jackson who took us into the world of RoboCop. Jackson’s character is named Novak. He’s on a segment that discusses robotic efforts to promote peace abroad and at home in America. Field report takes us to the streets where silver robots with red laser eyes are patrolling the streets, They look like terminators. There are even bigger robots coming behind them.

Michael Keaton says his character is the ultimate pragmatist.

Alex Murphy is with his family but gets blown up in a car bomb. Michael Keaton’s character works on saving Murphy’s life. They put him inside a machine. “We’re gonna put a man inside of a machine.” Cut to scenes of RoboCop in action. His visor is retractable and remains up during social interaction and comes down in combat. Government laws state that machines can’t pull gun triggers in the US (but they can on foreign territory) so they keep Murphy’s human hand so he’s exempt from that law.

Michael Keaton says he didn’t want to be another cliche villain.

Kinnaman: “The big difference with our version is that Alex doesn’t die – he’s amputated from the throat down, pretty much.” Over the course of the movie, he has this internal battle with the artificial intelligence and his own soul. “That was the challenge to portray that.”

The original Robocop suit is seen as a prototype. There will be a few different suits throughout the film.

ED-209 is used in Afghanistan sequence to secure the streets, shown to be used in a manner similar to military drones.

Film is shooting for PG-13 rating to “be seen as wide an audience as possible”.

Director Jose Padiha says, “You should never fear a gun, you should fear the guy that’s holding the gun, because the gun doesn’t shoot itself.” He added that the film explores technology and accountability and that RoboCop will address advancements in technology.