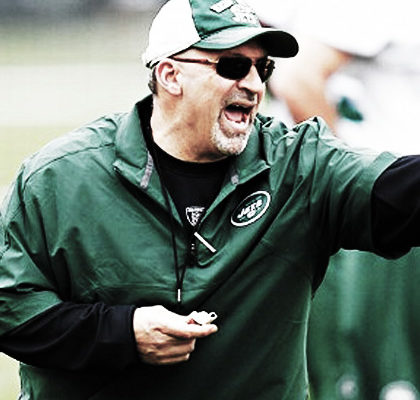 The New York Jets have had a terrible season. They picked up Tim Tebow in the off-season and then proceeded to… not figure out how to use him. When quarterback Mark Sanchez wasn’t making an ass of himself, he was making a b-line for his teammate’s. Coach Rex Ryan finally pulled the disappointing Sanchez and skipped his number two quarterback, Tebow, for third-string Greg McElroy. When McElroy couldn’t play because of a concussion, Ryan went right back to the guy who helped them end their season with a 6-10 record.

So with Rex Ryan refusing to play anyone with the name “Tebow” and Mark Sanchez refusing to move the ball down the field, ESPN reports that the organization will be firing… Tony Sparano?

According to sources, the Jets do not plan to bring back offensive coordinator Tony Sparano (the Jets are ranked 30th in total offense in Sparano’s first season in the role) and [team owner, Woody] Johnson has been putting out feelers for ideas to determine the ideal structure of his front office.

Over at Tim Tebow’s old stomping ground, offensive coordinator Mike McCoy was able to work with Tim Tebow and now Peyton Manning, both quarterbacks who were able to enter the post season. Sparano couldn’t work with Tebow’s style or, as has been said, it was Ryan who didn’t want to.

So Rex Ryan didn’t want Tebow to play and somehow Sparano is taking the fall while a lot of others who should be shown the door will be coming back for another season, or Sparano is a horrible offensive coordinator who directs quarterbacks to run directly into the ass of the defensive line.

Pro Tip: If you want to run the clock on your professional football career, on the field or sidelines, work for the NY Jets.