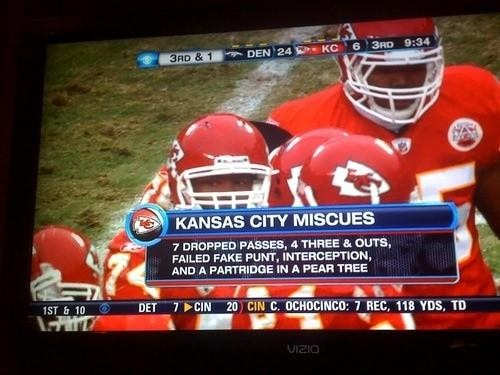 The Kansas City Chiefs lost their final game to Denver, giving the Broncos home field advantage throughout the playoffs. Someone in the broadcast truck decided to have a little fun with the Chiefs’ failures.

UPDATE: Whoops. Thanks to a comment from Dave, we actually looked at the score from both of this year’s Kansas City-Denver games and neither seem to line-up with the image. In fact, the on-screen graphics would have implied this was the November 25th game at Kansas City, but the score would still give Kansas City more points than they actually ended up with. So the image is either fake or from another season. Either way, Kansas City is still a joke.