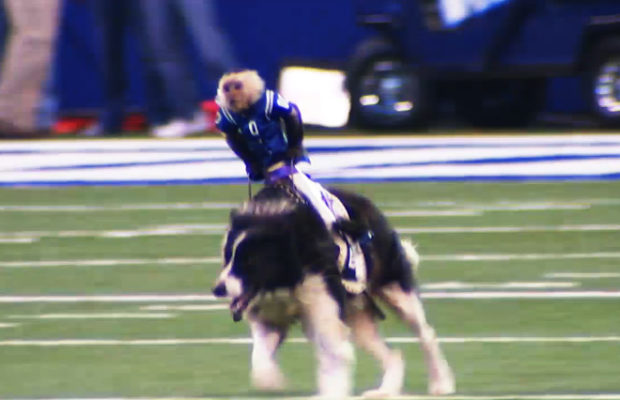 Somewhere, somebody, prior to this weekend made the suggestion, “What if the half-time show is just small monkeys riding dogs around herding sheep?” Whoever that person is, we applaud you as this is mind blowing. We can wrap our heads around the concept — a monkey is small enough that if you put a saddle on the back of a dog, the dog could run around like a horse with the monkey on its back. The idea that this was half-time entertainment is the part that’s mind boggling.

[sws_button class=”” size=”sws_btn_small” align=”” href=”http://popfcl.com/Uzazrw” target=”_blank” label=”Click Here For The Video” template=”sws_btn_default” textcolor=”” fontweight=”normal” bgcolor=”” bgcolorhover=”” glow=”sws_btn_glow” btnwidth=”” textalign=””] [/sws_button]
This isn’t something new but for some reason this time around, mainstream America is finally getting a dose of the oddest, most entertaining half-time show in football.