Home / Features / Fall Freak Out: Go On and The New Normal

Fall Freak Out: Go On and The New Normal 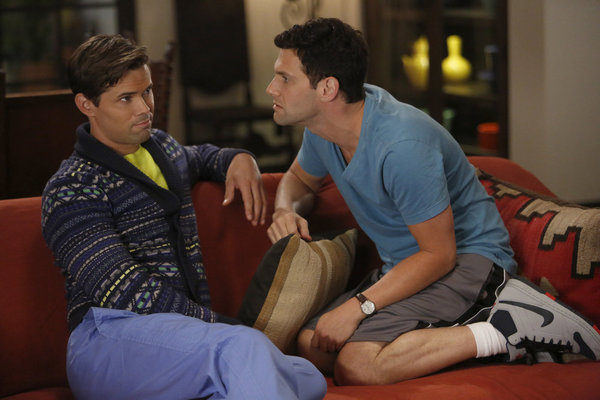 In an attempt to find the next new thing and to also make myself uncomfortable and possibly ill, I am engaging in what can only be known as the FALL FREAK OUT. I will endure as many hours of series premieres over the next two months (when they actually air) until I either learn to like bad TV or I melt into the floor in an Alex Mack-like puddle.

Last night was an NBC double-whammy: Matthew Perry’s “Go On,” and the Modern Family-esque “The New Normal.”

GO ON
I already begun tearing a new one for M.P. in my July post here. And I guess now I have returned to just finish the job. Overall impression: the show really wants you to be emotionally attached to its wide cast of characters way too early on.

It opens with good ol’ Matthew Perry, a sports radio personality, talking about how much he hates the New York Marathon because he thinks distance running is depressing. He hates to be lonely. Cue: dark, empty apartment and M.P. leaving a little teary eyed.

NBC, I appreciate that I didn’t have to make any decisions or do any analytical thinking on my own. “Go On” told me exactly the moral of the story right at the beginning. I would have turned it off when I knew how it was going to end 3 seconds in, but this is Fall Freak Out and I can’t lose it 5 minutes into my first show.

The supporting cast is a strange, but international one, with characters from Asian, African, and Hispanic descent. The show keeps pressing us to feel bad for everyone– they really want us to feel close. I hate to break it to the show’s writers, a loyalty like “Breaking Bad” or “Sex and the City” takes years to create. Give me some background and let me learn to love them and hate them on my own.

The creepiest moment of a very forced relationship is the one between Perry and his assistant. We get no background and yet he asks her “To think of me when I am not around” to make him feel better about losing his wife. Disturbing. Nothing about their office relationship proved to me that this was alright for him to say. Can’t we just get some witty banter and bring up the fact that she is his post-wife’s-passing support system later?

I need to also be fair. The show did have it’s moments. The taking of the blind man to a basketball game, with floor seats, was kind of touching… Until M.P. was told to shut his eyes and experience the noise. We at home experienced the noise as well– an all black screen.

Will I watch again? No. Unless I am home from happy hour and feeling good.

THE NEW NORMAL
I’ve already messed up the rules of the Freak Out with this one because apparently the show premiered last night and aired its pilot episode then. I swear to you, everything I read said September 11th. But, apparently I can’t read. So I bring you a review of the second episode of TNN that aired tonight, also on NBC.

Even without any backstory it wasn’t hard to figure out what was going on so far. The guys started getting cold feet about their potential baby and decide to be “young again” and go out.

I think this show is best described through a + and – system:

+Mac’s mom from “It’s Always Sunny” plays a nurse.
++Every single reference to Grey Gardens makes my heart sing with joy. And the little kid dressed up in costume is brilliant.
–This grandmother character is a little too terrifying for my taste. She’s like Lucille from “Arrested Development” on speed. She actually says something along the lines of being alive when presidents owned people like Barack Obama. Yikes!
+Filmed like a mockumentary
-Is this trying to be Modern Family?
+I don’t watch that show so I don’t care.
+”Did you tape ‘Say Yes to the Dress?'”
-Wayyyy over-the-top sappy end trying to make us care.

Total: 2+
Will I watch again? Yes. As scary as Nana is, and boring as Goldie is. I like the witty gays.

Tonight’s Conclusion:
Seriously NBC, with these two I was more attached to the Google Hangout commercials aired in between.

Amanda Kusek writes for Pop Focal, ReAlto (gorealto.com), and her own site amandakusek.com. She pays the bills with a job as an assistant and lives in New York City. Alicia Keys and Jay-Z told her once that if she could make it here she could make it anywhere...she's working on this.
Related Itemsfall lineupFall TVGo OnMatthew PerrytelevisionThe New NormalTV
← Previous Story CW Developing Wonder Woman Series
Next Story → Fall Freak Out: Revolution