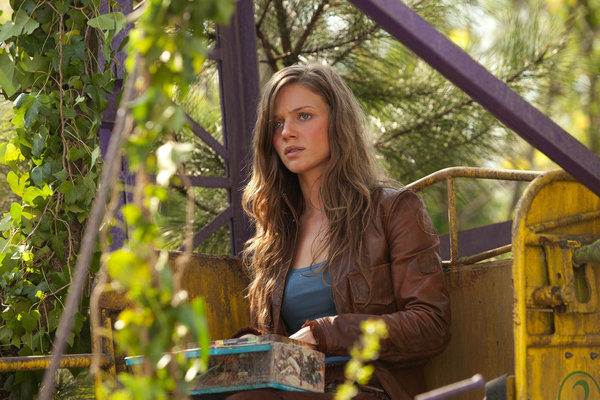 Did you think I forgot? I didn’t forget, oh no. Just busy being awesome at fairs (The Big E, to be exact) and getting painful hangnails. With this, I missed the premiere of “Mob Doctor” and I couldn’t be more depressed. I was really looking forward to writing about it and falling into a twisted love affair. But alas, maybe I’ll have to do a Fall Freak Out: What Was Missed series as well.

I did manage to catch “Revolution”. This was, at least in my opinion, one of the most promoted series premieres of the fall. Giancarlo Esposito was the biggest name draw for me because, as we know, I am a crazy “Breaking Bad” fan. I need my Esposito fill and tonight I got it. An insurance adjuster turned miltia-man? Yes please, sign me up. It’s almost chem teacher turned meth dealer and enough for me. “That puts your Daddy’s blood on your hands son.” YES.

The acting, as I have read previously, is pretty horrible. Tracy Spiridakos does not find her footing in the first episode, which is sad, as she is crazy hot and wearing all leather. Zak Orth is pretty great as the former Google billionaire who misses his private plane. I never doubt, not even for a second, that this guy is terrified by the lack of electricity. I hope Spiridakos can play it up soon and fast, shows don’t get a lot of time to develop these days, and so we need killer-fresh characters out of the gate for them to survive. Her Charlie is lacking.

With that said, Uncle Miles’ Kill Bill-esque showdown was pretty entertaining because my feminist side was completely let down by Charlie being saved, again, by her Militia boyfriend. Ugh, I know she grew up in a village but so did Katniss and she does ok for herself. I will need Miles to carry this show for me as the lovable/hateful/drunk uncle that we all know and love.

Esposito gets angry and I love an angry Pollo. I hope more inaccuracies come up so Giancarlo can lose his mind.

In the end, the biggest draw of this show is answering, “What made it go out?” And “Why does that lady in the middle of nowhere have access and an amulet?” I was never into “Lost”, I couldn’t handle anticipating for years what the point of everything was, and I remember the sad day when I watched the finale with my boyfriend. He was so sad and down with the finale after years of dedication. I fear that will happen with “Revolution”… if it gets that far. Then again, I have put every single egg I own into the “How I Met Your Mother” basket.

Will I Watch Again: Yes. Because, damnit, I want to know WHY.

Amanda Kusek writes for Pop Focal, ReAlto (gorealto.com), and her own site amandakusek.com. She pays the bills with a job as an assistant and lives in New York City. Alicia Keys and Jay-Z told her once that if she could make it here she could make it anywhere...she's working on this.
Related Itemsfall freak outFall TVgiancarlo espositorevolutionTV
← Previous Story Fall Freak Out: Go On and The New Normal
Next Story → Fall Freak Out: Partners