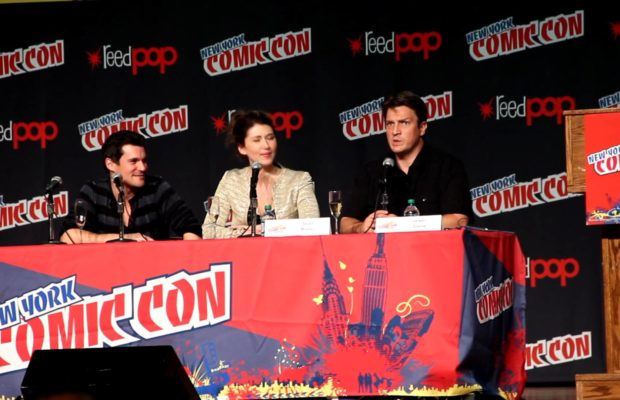 Long before The Avengers set box office records and made Joss Whedon a household name, Whedon had already gathered a cult following for “Buffy the Vampire Slayer” and “Angel.” But his sci-fi series, “Firefly” holds a special place in the hearts of fans after it was cut down by Fox after only a single season.

However, “Firefly” fans (or Browncoats) have remained passionate about the series for a decade and the Science Channel has given the show a home on cable to attract new viewers. This November, Science is celebrating the series with a new special called “Browncoats Unite” for the 10th Anniversary of “Firefly.”

On Saturday, October 13 at the New York Comic Con, Entertainment Weekly’s Kyle Anderson served as the moderator for Science’s ‘Firefly’ 10th Anniversary Panel with cast members Jewel Staite and Sean Maher. Nathan Fillion also joined the panel via cell phone with some spotty audio quality. But Fillion quickly revealed that he had also traveled to NYCC for the panel, much to the surprise of Staite and Maher, both of whom embraced him.

A running theme of Anderson’s questions seemed to keep coming back to the short life of “Firefly” on TV and it’s sudden cancellation. At times, the cast seemed to feign annoyance at the repeated references to it, but Fillion summed up their feelings nicely.

“It’s one thing if it’s just us sitting in someone’s living room saying, ‘it was cool, right? I mean it was good. And it was kinda kickass sometimes,’” said Fillion. “People liked it, right?” asked Fillion, before the crowd erupted with cheers.

“I think that we all knew right away that it was a special experience, a special group,” related Staite. “We knew that we were the underdog, I think from day one. But at the same time, I’ve never laughed that hard on a job before. We had a really, really good time.”

Almost as if to pour salt on the wound, the next clip from the anniversary special dealt with the cast’s reaction to the cancellation; for which Anderson apologized.

“You couldn’t even go to anger right away,” related Fillion. “It’s like having the most beautiful, amazing girlfriend you’ve ever had…”

“Or boyfriend,” added both Staite and Maher, to laughter from the crowd.

“And they’re super hot and super smart and super wonderful and amazing and suddenly they say ‘it’s over,’” continued Fillion. “And they’ve packed their bags and they’re gone already. You don’t have time to go ‘I’m mad! You suck!’”

Staite said that the day of the cancellation was the first time that she had ever seen Whedon angry. “He was very upset. He was shaken. That was the weirdest part. He’s a very confident person and he was visibly shaken that day. And I knew, I knew. As soon as I looked in his face, I was like ‘Oh God… back to the drawing board.’”

However, Fillion, Maher and Staite were united in their assertion that Whedon was a fantastic boss and Fillion made a point of adding that he is a better actor and a better person after working with Whedon.

Finally changing the subject to the show’s early days, Anderson got Staite to mention that she had originally wanted to play River Tam on the series.

“[Whedon] was like ‘nope,’” said Staite. “He wanted me to read for this Kaylee role. So I thought ‘whatever’… I got a call a couple of weeks later and he wanted me to fly down to LA to meet with him… and when I went to my test, Adam [Baldwin] was there and Alan [Tudyk] was there. We were in the waiting room together eying each other and sweating.”

“I went in and the only face I saw in this whole room of people was Joss,” continued Staite. He was sitting in the front row, eye-to-eye watching me read. And he was smiling and nodding the whole time. It felt like he was in my corner and that was it.”

“For me, it wasn’t the script, it was Joss,” offered Maher. “There was no script when I initially met him. And I got to hear the world from his mouth. He explained everything to me because I had a zillion and one questions…. I left that meeting and called my agent and said ‘I don’t care about the script, I want to work with this man. He is incredibly engaging and just a genius.’”

“[‘Firefly’] was my first lead, the workload [was] heavy and it was long hours,” recalled Fillion. “Being challenged at work everyday is a wonderful thing. And having a team around you of amazing people believing in what you do everyday… it’s amazing. When it doesn’t feel like a grind and you’re grinding, that’s a great feeling.”

Both Maher and Fillion have roles in Whedon’s upcoming film adaptation of Much Ado About Nothing. Maher noted that the film has been picked up by Lionsgate and he urged fans to be patient for the release and to “keep your pants on.” In response, someone in the crowd told Maher to take his shirt off; which led to chants of “take it off!” from the audience.

“Nothing quite says I love you and respect your work like ‘take it off,’” quipped Fillion.

Eventually, the question of using Kickstarter or some other form of social fundraising was floated as a way to resurrect “Firefly” as a TV series. But Fillion once again had the best answer.

“The dream is amazing, right? I love dreaming about it,” shared Fillion. “But there’s a lot of logistics that you and I don’t understand about legalities and who would like to let that go let someone else make a ton of money off of it when you canceled it. People don’t like to do that. But if we’re dreaming, tell me what you guys think about this: ‘Firefly: The Animated Series.’”

As the cheers from the audience subsided, Fillion added that his vision of the animated series would be “dark and not really for kids… You don’t have to get dressed up, you can do your job from Toronto.”

Judging from the reaction of the crowd, any new iteration of “Firefly” or its feature film follow up Serenity would still receive a warm welcome from the Browncoats. As Mr. Universe once said, “you can’t stop the signal.”

“Browncoats Unite” will premiere on the Science Channel on November 11.

UPDATED: We now have video of the full panel

Jon is Pop Focal's resident nerd. An expert in movie and video game knowledge and a collector of things that clutter up the offices. A former radio and TV personality who brings a very different attitude to the Pop Focal network.
Related ItemsBrowncoatsFireflyNYCCReunionTV
← Previous Story NYCC 12: Marvel Announces Character Return For S.H.I.E.L.D. Show
Next Story → Son Of BEVERLY HILLS COP Coming To CBS