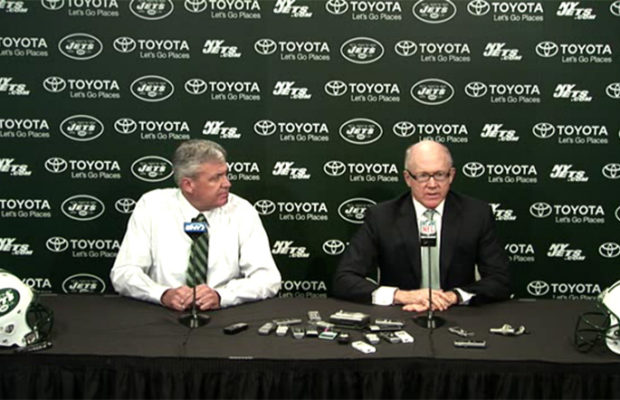 This morning, NY Jets owner Woody Johnson and head coach Rex Ryan held a press conference to discuss why they’re arguably the worst team in the NFC. The tone was more, “Aww, shucks guys… we could have done better” though and doesn’t seem that much like drastic changes are coming except for hiring new employees to fill slots where they fired everyone.

Johnson and Ryan kicked off the conference to mourn their firing of GM (Mike Tannenbaum), praising him through-and-through before explaining they officially fired Tony Sparano, as we predicted. Ryan moved on to defend himself (although he started the speech with, “Where I think I came up short this season”) as he explained what type of team he wanted and that it just didn’t “come together.”

“This is a new beginning for me.”

Sanchez as starting quarterback though does seem to be in the air. Ryan wouldn’t commit to Mark playing first-string next year and even threw his contract out the window stating money wasn’t going to be a factor for who starts.

Woody claims he, unlike every Jets fan, never considered firing Rex Ryan. At this point we assume Rex Ryan is blackmailing Woody Johnson.