Why We Love “The Joe Schmo Show” 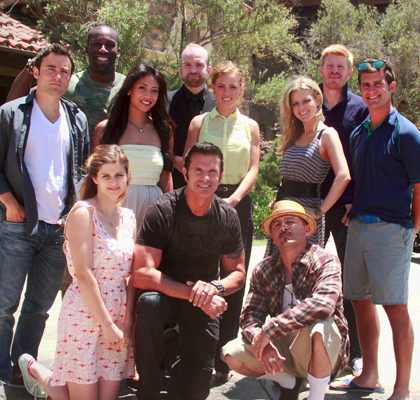 Within the first few minutes of the premiere of The Joe Schmo Show we meet Segun Oduolowu as “Lavernius, The Black Guy.”

“I play the big, muscular, token black guy that appears on reality shows.”

The Joe Schmo Show is a parody of a reality show. It mocks the typical clichés we expect from so-called reality television. In the middle is Chase Rogan, a really nice guy who has no clue this is all fake. The show is scripted (just like most reality shows, truthfully) to make the most out of the cast. All of the “contestants” are actors playing their typical parts like “The Model”, “The Asshole” and “The Overachiever.” Thrown into the mix are others that make it difficult for Chase to keep a straight face like “The Deaf Girl” who is teamed with him to defuse a bomb strapped to his chest.

The entire production is heavily choreographed to push Rogan to his limits. The cast, crew and the audience must constantly ask themselves, “Is he really buying this?” With slight stumbles along the way, the crew puts on a great show for the Schmo and us. Over-the-top plot elements and flat-out hilarious writing make the show surprisingly entertaining and offer a few laugh-out-loud moments.

The producers through in Lorenzo Lamas as himself vying for the prize ($10,000 and a bounty hunter job) of the fake show, The Full Bounty. Lamas isn’t the only recognizable person in the house. During the first episode a familiar small-role actor “looks familiar” to Chase and the audience. Actor Michael Weaver would look familiar to anyone who’s watched Super Troopers or Club Dread, two small roles in Broken Lizard projects he starred in. This comes up and it’s just the first episode.
This isn’t the first time The Joe Schmo Show has aired. The series originally ran in 2003 with a second attempt in 2004.

If Rogan can make it through the show without catching on, he’ll win $10,000 (which is the real game he’s playing). We hope he does as this show is actually entertaining, making jokes at the expense of reality television while being an actually entertaining (reality) show.