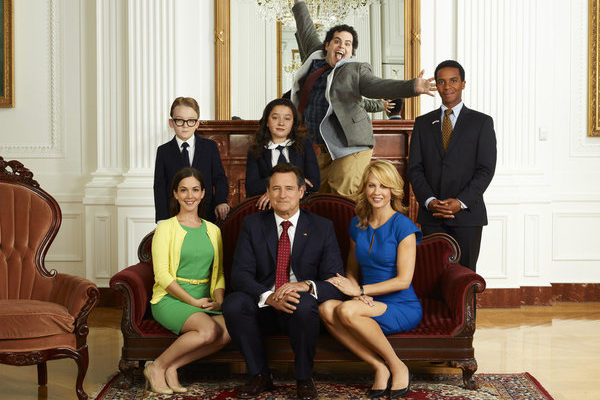 I’m really happy for Josh Gad who made his name as the lead in Broadway’s Book of Mormon. This is his first lead role in a series along side TV-veteran Jenna Elfman and movie-veteran Bill Pullman. Unfortunately, this show is 1600 Penn and it’s just… garbage.

Maybe it’s bad timing. Just coming off a big election year audiences are fatigued with politics and political humor. NBC might argue this isn’t a political comedy, just a sitcom centered around a political family. The show even claims they’ll feature “media figures” but not politicians which, knowing NBC’s love for synergy means we’ll see Rachel Maddow pop-up at least once before the show is cancelled.

The show is heavily banking on Jason Winer, co-executive producer of Modern Family who is 1600 Penn’s executive producer. That’s a lot of marketing, advertising and buses wrapped with the cast’s faces because of a guy who worked on a hit show in some role.

For their part, it’s good to see a network take a chance on a high-concept series. They have a history of doing so with shows like Mockingbird Lane (which they cancelled before it had the chance to go to series). The problem is they don’t stand behind it. The network doesn’t commit to letting a show grow or seeing it through. Community which veered  away from a traditional style to what Dan Harmon created has been on the fence and Up All Night was forced to transition to a multi-camera sitcom which saw the series’s creator depart. The network seems to want the return of yesteryear when Friends was the dominating factor on the schedule.

CBS is churning out sitcoms with Chuck Lorre while NBC can’t create a successful traditional sitcom for their lives. Maybe it’s time to embrace the difference rather than jump ship after a few episodes.