Home / TV / History Channel Is Bringing Vikings (and Mohawks) Back

History Channel Is Bringing Vikings (and Mohawks) Back 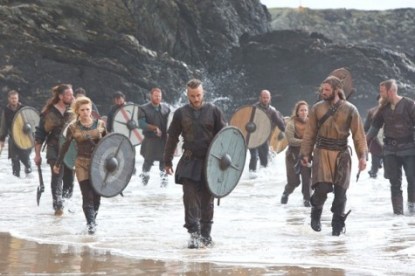 When I was in high school I had a thing for guys with mohawks. There is something significantly badass about a mohawk; it made me think that guy would beat someone up for me or, and this is even hotter, for no reason at all. This March the History Channel is not only bringing mohawks back, but they’re bringing vikings back in an incredibly sexy way.

Created by Michael Hirst, the guy who brought you The Tudors, Vikings takes us to the world of Ragnar Lothbrok, a Farmer/Viking Warrior (quite a step up from the Bus Boy/Artists we all know) who dreams of bigger and better raids. Ragnar wants to go West to a world of riches but his Lord, Gabriel Byrne, would rather do what they’ve always done and go East.

The premiere has no shortage of carnage or sex. We open on Ragnar looking fine (ladies, did I mention Travis Fimmel’s smoldering blue eyes?) and amidst a brutal battle. Later, his beautiful wife (Katheryn Winnick), wins a battle of her own and tells Ragnar she is going to ride him like a bull. Hirst is not messing around here.

I really just wanted you to see how hot he is.

These are the vikings of your dreams! But as Fimmel pointed out when I had the opportunity to speak with him, the cast and crew are really aiming to “humanize the Viking.” They were real people with families and lives at stake– not just the brutal warriors at raid. The premiere shows us Ragnar’s tender relationship with his son and his desire to question the status quo. He’s just another middle class guy, rising up, mohawk and all.

While it is a thrilling story and pretty sexy, it’s still the History Channel, so be ready to happily learn a little along the way. For example, Ragnar Lothbrok is an actual historical figure said to be a descendent of the Norse god Odin and the show highlights some very cool brushes with the vikings’ Pagan religion. Fimmel made a good point when I spoke with him, this is a subject that’s never been tackled in this way before. Learn something and jump on the boat now.

Vikings premieres this Sunday, March 3rd, at 10PM EST on the History Channel.

Amanda Kusek writes for Pop Focal, ReAlto (gorealto.com), and her own site amandakusek.com. She pays the bills with a job as an assistant and lives in New York City. Alicia Keys and Jay-Z told her once that if she could make it here she could make it anywhere...she's working on this.
Related Itemshistory channeloriginal seriespremieretelevisionvikings
← Previous Story “Girls” Officially Renewed For A Third Season
Next Story → Matt Lauer Is Probably Getting Fired