Matthew Perry: Can He Do It? 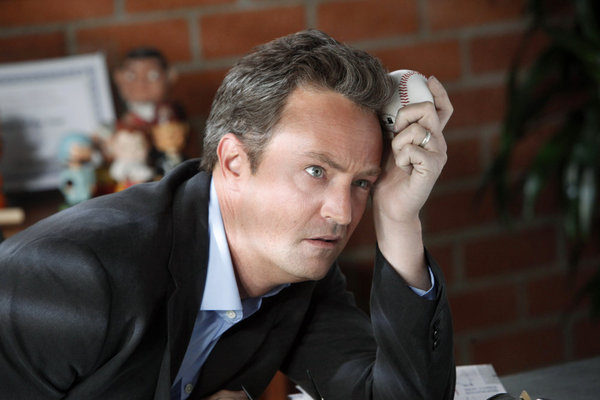 It seems that Matthew Perry is trying again after last year’s bomb, Mr. Sunshine, to re-kindle some of his Friends magic by teaming up again with executive producer Scott Silveri who worked with him on the hit show.

The story of Go On revolves around Perry’s sportscaster Ryan King as he tries to recover from the death of his wife by attending group therapy sessions. Don’t get me wrong, I loved Friends and I loved Matthew Perry on Friends, but whatever this promises to be I’m worried will just be another failed sit-com he will have to add to his resume. It just doesn’t seem daring enough an idea to break Perry’s image to those of us (or all of us) who only know him as “Chandler”.

It seems that Perry’s co-stars have branched out to some slightly riskier projects: Lisa Kudrow is working on Web Therapy which started as a web show and has moved to Showtime, Matt LeBlanc is winning Golden Globes for Episodes (by yes, daring to play himself), and David Schwimmer is tearing down houses.

Perry needs to branch out a la Bryan Cranston and really challenge not only himself, but the viewers who have just about given up on him. Now I am excited to see John Cho (Harold from Harold and Kumar) and Tyler James Williams (Chris from Everybody Hates Chris) play opposite him because they also need to break away from their iconic characters as well, but the question still remains, is this the show to do it on?

Amanda Kusek writes for Pop Focal, ReAlto (gorealto.com), and her own site amandakusek.com. She pays the bills with a job as an assistant and lives in New York City. Alicia Keys and Jay-Z told her once that if she could make it here she could make it anywhere...she's working on this.
Related ItemsFallfriendsGo OnMatthew Perrynbc
← Previous Story HBO Picks Up Comedy Series From Stephen Merchant
Next Story → Peggy Ain’t Going Nowhere – Elizabeth Moss Coming Back To MAD MEN Next Season