Why NEWSROOM Is The Best New Show Of 2012 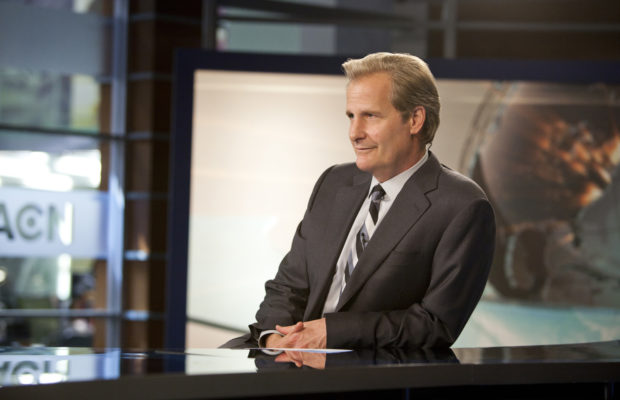 We’re half way through the year and I’m prepared to call the race for Best New Show. Sure, there’s all the shows premiering in the fall but we’ve seen previews and I’m not that impressed.

We rip Aaron Sorkin for his “walk-and-talk”, his re-use of his own material and the smart, snappy dialogue between co-workers that can only exist in his mind. Ahead of all his faults, the guy puts together a damn good show.

Newsroom seems to be a collision of all Sorkin’s material from over the years. Its behind-the-scenes of a television show like Sports Night hitting head on with the drama of Studio 60 On The Sunset Strip (still an awful title) with a pinch of politics from The West Wing. You can even see the same characters played by different actors on different shows (Jim Harper of Newsroom meet Jeremy Goldwin of Sports Night). Fault him all you want though. If this is the result of years of varied work in different genres and cancelled series, I’m glad his record was so low.

The thing about Newsroom that makes it exciting is a combination. The fiction Sorkin has developed with the characters and their stories mixed with realistic business politics and actual non-fiction that we’ve lived through creates an exciting show. HBO knows a thing or two about how successful stories based on popular news events can be. Recount, covering the 2000 election and Game Change following the McCain/Palin election bid were both great draws for the network.

As much credit as I’m giving to Sorkin, it goes without saying how great the cast is. The big names including Jeff Daniels, Emily Mortimer and Olivia Munn all bring their game, not to mention sleeper-favorite Sam Waterston and his bow-ties. The cast is also rounded out with great supportive actors that drive more of the show within a show drama. The “background players” also get some share of airtime. Something that Sorkin has done with past shows is offer regular actors to work around the central cast. They may barely provide a single line a season but it gives some odd comfort to the show, an increased realism that charters far from the randomness most shows implore of extras turning knobs in the background.

Newsroom is a fun show. That may sound odd given its a drama. During this week’s episode, I found myself leaning forward in anticipation as the host and staff of News Night covered another major news story from real-life past. The show has a keen ability to draw interest of fictional characters dealing with real events. As veteran anchor Dan Rather has pointed out in his reviews of the show for Gawker, the show is extremely close to what a real news room is like which makes me want to watch even more.

HBO has already called for a second season for the series. Newsroom airs Sundays at 10/9c on HBO and is also available on HBO On-Demand and HBO GO.