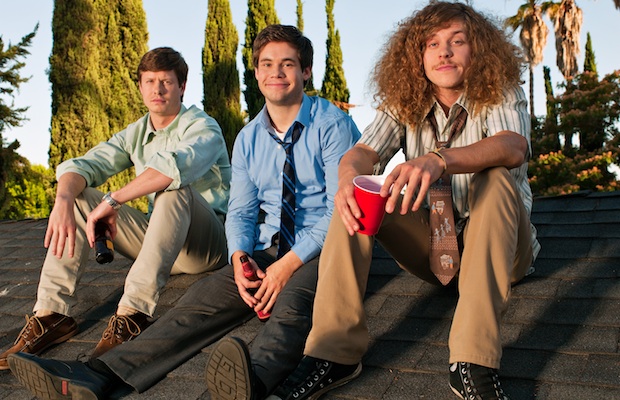 Three of television’s favorite weirdos come back tonight for their season 4 premiere. I encourage you to at least watch one episode from seasons 1 or 2 prior, because this episode even had me gagging and I don’t scare easily.

It’s storyline is simple, Workaholics follows three college friends in their post-grad lives balancing boring jobs as telemarketers at TelAmeriCorp and all the drinking and smoking they need to get done in between. I guess you can say it’s kind of like HBO’s Girls if it were a) a comedy (…it is?) and b) followed a group of guys with no aspirations other than being wizard rappers.

The season premiere kicks off with the guys dying to participate in a roast for their less-than-liked co-worker. At this point, I am starting to think Comedy Central believes they invented roasts…

It’s a great start to the season as we get see some of our favorite TelAmeriCorp team members: Alice is rocking some kick ass hair, Montez gets a taste of his own medicine (cue my gag reflex), Alice’s brother B-Rad fills their cube with packing peanuts, and of course, Waymond is there to round it out.

I do have to say it has some pretty agressive content and these guys rarely hold back, but they do have some their lovable nerd humor available to balance it all out. For example, they each pick a Mike Meyers movie when arguing what the best comedic film of all time is. That’s why we can get behind these guys, even when they get a little gross.

Amanda Kusek writes for Pop Focal, ReAlto (gorealto.com), and her own site amandakusek.com. She pays the bills with a job as an assistant and lives in New York City. Alicia Keys and Jay-Z told her once that if she could make it here she could make it anywhere...she's working on this.
Related ItemsComedy Centralfeaturedpop wirepremiereseason 4 premiereseason fourworkaholics
← Previous Story “Adventure Time” And Other Adult Swim Shows Coming To Netflix
Next Story → “Glee” Stole A Song It Wanted To Use